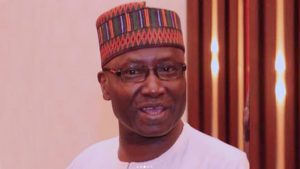 The newly appointed Secretary to the Government of the Federation, Boss Mustapha, on Monday met with the leadership of the National Assembly, where he told  President Muhammadu Buhari-led administration could not succeed without the help of the Legislature.

Mustapha, who met with the leaderships of the Senate and the House of Representatives separately, pointed out that President of the Senate, Bukola Saraki, was instrumental to the success of the All Progressives Congress and Buhari at the 2015 general elections.

“If the National Assembly does not cooperate with the Presidency, I am not very sure we will be able to achieve the desired result that we want to see, given the mandate that we have freely received from the people of Nigeria.

“So, this is basically to come and assure you that in every area that you are soliciting the cooperation of the Presidency, being the Secretary to the Government, I would ensure that the National Assembly receives that cooperation because, jointly, if we work together, whatever has been lost in the past, we can quickly redeem and recover and make progress, so that by the time the first four-year mandate that we received comes to an end, we can show on our scorecard that these were the promises we made.”

Mustapha noted that Buhari was passionate about the three-point agenda of his administration.