Home News Feed Why We Summoned SSS Officials – EFCC
Facebook
Twitter
WhatsApp
The Economic and Financial Crimes Commission on Tuesday, talked on media report of a dispute going on between the agency and the State Security Services. 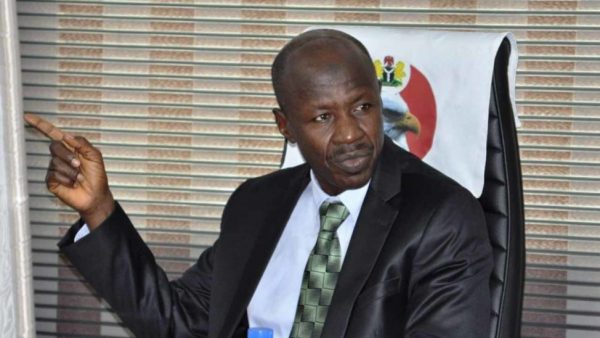 EFCC STATEMENT – Re: DSS, EFCC in Fresh Face-Off over Invitation to SSS Operatives
The attention of the Economic and Financial Crimes Commission, EFCC has been drawn to a report captioned, DSS, EFCC in fresh face-off over invitation of SSS operatives, which appeared in the Sunday Tribune newspaper of November 5, 2017.
The report written by a certain Taiwo Adisa painted a picture of an imaginary feud brewing between the Department of State Services (DSS) and EFCC over the alleged invitation of some DSS operatives, which it claimed was an attempt by the Commission to “rubbish the Service since the DSS was not answerable to the EFCC.”
Quoting an anonymous source, it stated: “what are they (EFCC) trying to do, audit our operations or what? Did the Service report any financial infraction to them and call for their intervention? It is just a case of overzealousness and lack of professionalism and we won’t allow that, because what you allow is what will continue.
“If they (EFCC) need any clarification on anything, they should come to our office. We can’t be humiliated by anybody. Never! If this is fallout from the security report officially requested by the National Assembly, then we wish them luck. We stand by our findings.”
It is important to state that it is not strange for the EFCC to invite (for questioning) officers of other law enforcement agencies alleged to be complicit in any case being investigated by the Commission.
But there are protocols in doing this; and part of that protocol is to write to the heads of such agencies, requesting that the officer(s) in question be released to be interviewed.
In the course of investigating the arms procurement scandal in the Office of the former National Security Adviser, ONSA, Col. Sambo Dasuki, the Commission has had cause to request the release of officers of other security agencies, including the Nigerian Army, the Nigerian Air force, the Nigerian Navy and now the DSS, for questioning. All but the DSS have acceded to this request.
For the avoidance of doubt, the arms procurement investigation is national in outlook with alleged culprits cutting across the military, security establishments as well as the political class. It is not targeted at any institution.
Consequently, the insinuation about a revenge-instigated investigation of the DSS by the EFCC over its role in the senate refusal to confirm Ibrahim Magu as substantive chairman of the EFCC, is not only specious, but pure mischief contrived for motives that are unclear.