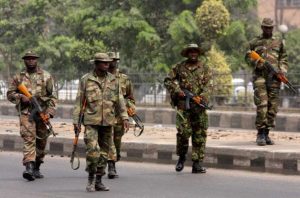 21 suspected cultists have been arrested by Soldiers attached to the 145 Battalion deployed to Umuahia, Abia State in Umudike in Ikwuano Local Government Area of the state.

This was confirmed by the Assistant Director, Army Public Relations, 14 Brigade of the Nigerian Army in Ohafia, Major Oyegoke Gbadamosi,in a statement which was made available to Southern City News on Friday.

He noted that the suspects were nabbed following intelligence gathered about their operations.

Gbadamosi stated that the suspected cultists, aged between 18 and 25 years were sighted in the bushes around Umudike in Ikwuano LGA throughout the night of October 15, probably meeting for initiation purposes.

He said, “Based on the information received, the troops of the Forward Operation Base, Obot Akara swung into action and apprehended 21 suspected cult members which include one Mr. Brown Christian and 20 others.

The Army spokesman also added that in a related development, soldiers of 144 Battalion on routine patrol on Uka Egbu Street in Aba North LGA smashed a gang of three suspected armed robbers on October 15.

He added that the suspects also abandoned one tricycle with registration number: ESA 036 VC and a bag containing their personal belongings. He said efforts are ongoing to arrest members of the gang.

According to Gbadamosi, soldiers attached to the 145 Battalion at Isiala Ngwa North military checkpoint along Aba-Port Harcourt expressway acting on a tip-off, arrested a suspected armed robber, identified as Chijindu Chidi.

He said the suspect has been handed over to the police for further investigation and prosecution.