Home News Feed Three Nigerian Soldiers Killed As Army Clears Boko Haram Hideouts In Sambisa...
Facebook
Twitter
WhatsApp
In a statement released in Maiduguri, the Borno state capital on Sunday, by the Deputy Director Public Relations 7 Division of the Army, disclosed that the Army has lost three of its officers in fight against insurgency. 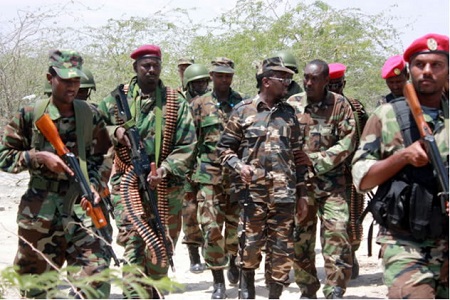 The Nigeria army says it lost three soldiers after successfully clearing 13 Boko Haram hideouts in the Sambisa Forest in one week.
Col. Kinsley Samuel, Deputy Director Public Relations 7 Division of the Army, disclosed this in a statement, in Maiduguri, on Sunday.
Samuel said that six soldiers were wounded during the operation while dozens of the insurgents where neutralised by troops.
“Troops of Operation Lafiya Dole” in conjunction with the Nigerian Air Force on Operation DEEP PUNCH has within the past one week embarked on clearance operations to dislodge Boko Haram terrorists from their camps,” he said.
He added that the troops successfully cleared the terrorists’ hideouts at Talala, Ajigin, Mangzum, Abagajiri, Kafa, Dusula, Buk, Malumti and Abulam among others.
“Furtherance of the clearance operations, the troops on Friday, 10th November 2017 while acting on credible information that the terrorists were massing up at certain camps in fringes of Sambisa forest, advanced and cleared the insurgents at Shyadawe-Angwan-Fulani, Shyadawe-Angwan-Bula-Musa and Shyadawe.
“The troops captured two gun trucks, three motorcycles, many bicycles and a laptop containing valuable information. They also located a vandalised and unserviceable tank in one of the camps.

“The remains of the deceased soldiers have been evacuated while those injured are receiving medical treatment at a military hospital,” said Samuel.