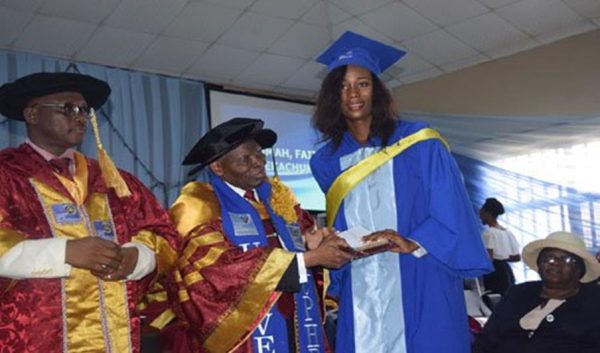 A young Nigerian lady who graduated with First Class Honours in Computer Science, has declared her intention to be an agricultural entrepreneur.

According to a The Nation report, Seriki-Sotayo, the sleepy host community of McPherson University, a faith-based tertiary institution established by the Foursquare Gospel Church in Nigeria, came alive last Saturday for the school’s second convocation where 46 graduates received their first degree.

Four of them – all ladies – finished with First Class; a feat that earned the valedictorians coveted academic prizes and accolades from the large audience that graced the event.

Miss Faith Onyekachukwu Ojumah, the Overall Best Graduating Student, who finished with a Cumulative Grade Point Average (CGPA) of 4.84, became emotional after she stepped out to receive her prizes. Being the first born in the family of three, the 19-year-old had promised her mother she would make her proud whenever she completes her university degree.

Sadly, Faith’s mother was missing at the graduation. She died years before Faith got admitted into the school. But her mother’s absence could not deter her father, a poultry farmer, from sharing the joy.

Faith, who received four academic prizes, said her desire was to become the best in her class through “strong will and pure determination” to make her parents proud.

“I was surprised the results of our final year examination were released and I found out that I would be graduating with the highest CGPA. I believe my mom would be proud of this wherever she is now, because it is a promise I made to her. I am only sad that she is no longer with us to witness what I have achieved today,” Faith said in an emotion-laden voice.

Speaking with CAMPUSLIFE, Faith said her dream to become a computer scientist could have been truncated by finance. She said her father, a low-income earner, took up the responsibility and struggled to make her and her twin siblings comfortable.

She said: “After my mom passed on, things were difficult for the family because the responsibility to raise me and my siblings fell on my father. Sometimes, dad would get stressed up trying to raise money for his personal projects and for our upkeep. Finance became the main challenge.

“One fact about being a student is that, if you are hungry, it won’t be possible for you to read and assimilate. Each time I felt the impact of this inadequate finance, I would want to give up on schooling, but I bore the pain because there was no reason to surrender. All of these reinforced my determination to succeed and also taught me to be a strong-willed lady with focus on excellence.”

What next after a degree in Computer Science? Faith said her plan was to become an agricultural entrepreneur and not to work for anyone. She has already created a team of software developers with the aim using their computing expertise to bring about revolution in the nation’s agricultural sector.

According to him, Nigeria’s education is anchored on “sinking, sandy shores”. Okebukola, who is the Pro-chancellor of Crawford University, said there was need for urgent reforms in tertiary education, given the widespread youth unemployment and what he described as “unimpressive on-the-job performance” of those who got employment.

He listed policy related challenges, outdated curriculum, poor facilities and rigid administrative and management routines as some of the factors responsible for the rot in the education.

He said: “The current education policy expects that the school curriculum at all levels and its implementation should be steered towards entrepreneurship and inculcate values that will foster better service delivery.

“The non-specificity and clarity of intention of this national policy on the direction the education system should take on job creation and service delivery and the weak inter-linkage with other national policies, such as those of science and technology, labour, employment and the service delivery charters, account in large part, for the inability of the education system to respond more forcefully to tackling the challenge of youth unemployment through education.

“If this national policy, in its present imperfect state, was to be implemented to the full, the gap between where we are now and where we should be with regard to job creation and service delivery, would have been significantly narrowed.”

Okebukola noted that education curricula at all levels were rich in content, but he added that they were found to be overloaded in the wrong areas.

He added: “The teacher factor would appear to be one of the most significant in the discussion on inhibitions to production of youth with job creation and good service delivery potentialities. Many teachers have shallow knowledge of their teaching subjects and worse still, shallower knowledge and skills in entrepreneurship to positively influence their students. The paradigm of preparation of these teachers largely accounts for this sad situation.

“We admit mainly people who are academically weak and emotionally unwilling into teacher education programmes. With low self-esteem and minimum motivational propelling power, these teacher trainees are corralled like sheep through the machinery of the teacher preparation process and come out ill-trained and ill-suited for the challenges of 21st Century teaching in a country aspiring to be one of the 20 largest economies by 2020.”

Prof Okebukola said modern facilities were required for effective delivery of a job-creation curriculum, adding that there was need to review curriculum at all levels to remove topics which he called “junk”.

In conclusion, he said: “The value system of our society has been severely compromised. The education system is looked up to as a tool for values re-orientation. All schools should be part of the crusade to inculcate the right values in the youth and adults. Values, such as honesty, diligence, love for country, respect for elders, hard work, ethnic and religious tolerance should be inculcated through appropriate curricular and co-curricular delivery systems.”

The Vice-Chancellor (VC), Prof Niyi Agunbiade, said the school had raised the bar of excellence in the delivery of quality education despite being a nascent tertiary institution. Through dedication to quality and excellence, the VC said members of staff of the school had won several local and international academic laurels.

Agunbiade urged the graduates to be brave and be good ambassadors of the school. He told them to take the risk and use their expertise to create jobs.

The Visitor to the school and General Overseer of Foursquare Gospel Church in Nigeria, Reverend Felix Meduoye, told the graduands that they were privileged to be trained in the faith-based school, which had “divine mandate to build a people of excellence and integrity” for service.

He said: “Your training at McPherson University has imbued the traits of a champion in you. As you go into the market place, the resilience of Christ already built inside of you will conquer for you all Goliaths that may be awaiting you.”

Other valedictorians are Ifeoluwa Sule and Oluwabunmi Onafowora of Business Administration, and Flourish Adediji of Biochemistry.