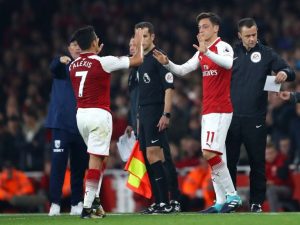 Manager of Arsenal Football Club, Arsene Wenger has disclosed that the duo of Alexis Sanchez and Mesut Ozil won’t be leaving the North London club during the January transfer window “unless something unbelievable happens”.

With their contracts set to expire at the end of the season, Sanchez and Ozil have been linked with moves away from the Emirates Stadium.

Speaking during his pre-match press conference ahead of the home league match against Huddersfield Town.

When asked whether they will stay, Wenger replied: “Yes, of course.”

The  Frenchman stated that: “As long as they are here, they give their best for the club.

“In my head, they stay until the end of the season. Unless something unbelievable happens I don’t see that changing.”

On if Sanchez and Ozil will remain beyond the end of the 2017-18 campaign, he added: “I am not the only one to decide that. They have to decide that as well.”