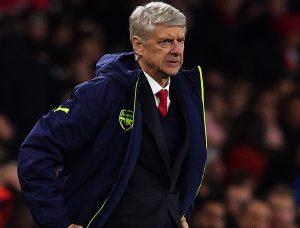 The French man said, it would be “hard to stop” the citizens  in their quest for the Premier League title especially if they continued to get the rub of the green from referees.

The Gunners manager accused City forward Raheem Sterling of diving after he won a penalty in his team’s 3-1 victory over Arsenal at the Etihad on Sunday.

Veteran French boss Wenger was furious with the performance of referee Michael Oliver who awarded the spot kick and a dubious goal, which the Arsenal manager claimed was offside.

“I believe it was no penalty,” said Wenger. “We know that Raheem Sterling dives well, he does that very well.

“And the third goal was offside. I am very upset because at 2-1 we were in the game. The third goal was the killer and it is by coincidence that mistakes always go for the home team, as we know.

“It is unfortunate that the game finished the way it finished. I am disappointed. You can accept if it City win in a normal way, they are a good side but this is unacceptable,” added Wenger after a match that left his side 12 points behind the table-toppers.

“Last season we lost two offside goals and it has happened again. City will be hard to stop.”