More details have emerged about Wizkid’s past relationship with Tania Omotayo – His second baby mama was said to be responsible for the relationship breaking up – She has however denied that this is what happened  Nigerian musician Wizkid has welcomed his third child with his manager Jada Pollock. It appears his second baby mama was not happy with the news as she took to her Instagram to throw shade at what many say is Wizkid.

She wrote that: “Careful what you do to a good woman cause you will have to deal with the B*tch you created”.

But a fan decided to tackle Binta, saying she was responsible for the breakup of his relationship with his then girlfriend Tania Omotayo.

The fan named Omowumi wrote that: “Lol, you subbing wiz now? This is an irony, cos you were the one that destroyed his relationship with his gf.

They broke up because of you. So this doesn’t add up at all”. Binta replied immediately: “My dear that relationship was already destroyed long before I came along”. But the fan was not relenting; she gave more details as to why Binta was indeed responsible for the breakup.

“Till September 2015, Tania and Wizkid were still together. King Ayo was born January 2016, which means you were pregnant before their break up. She’s a woman like you also, Put yourself in her position on how shattered and betrayed she will fell on hearing her boyfriend of 7 years impregnated another woman, while still with her.

Honestly I feel you can do better but there’s always a second chance for every mistake. I wish you the best”. Of course, Binta wasn’t going to allow her have the last word; “Was I the first woman to have a child for him during that so called 7 years relationship? Not to mention how many times the man declared himself single during that time period. Come on now, you are barking at the wrong tree.”

See a screenshot of their conversation below: 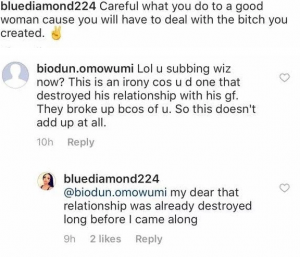 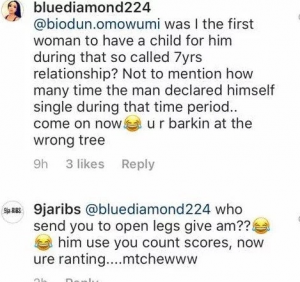