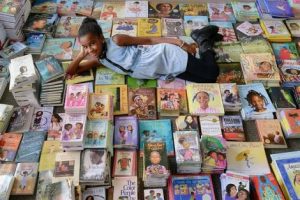 A 12-year-old feminist and author identified as Marley Dias has become the youngest person in history to make it to the Forbes 30 under 30 list.

She is an African-American activist and feminist has always been outspoken and passionately goes after what she believes in, which is equality of the sexes and races. She launched a campaign called #1000BlackGirlBooks in November 2015, when she was in sixth grade. The goal was to collect and donate 1,000 books that feature black girls as the main character.

Just last year, she was paid $6500 plus expenses to be the keynote speaker at a school event (read here). In 2016, she succeeded in collecting 7,000 books in which the main character was a black girl to give to charity.

She is also an author and has written a book titled: Marley Dias gets it done and so can you.