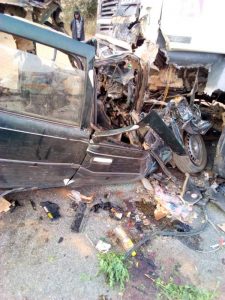 At least 15 people were confirmed dead on Saturday evening killed when a truck loaded with sand collided with a car.

The accident happened at Garin Ciroma, a village in Gagarawa Local Government Area of Jigawa State.

The Volkswagen Gulf 3 vehicle with a passenger capacity of seven and registration number AA 664 DRA was overloaded with 15 persons.

Audu Daurawa, the council Chairman of Gwiwa Local Government Area, confirmed that all the victims are from the council.

He said the truck’s headlights were faulty, thus the car coming from the opposite direction was not aware of it.

The accident happened at about 9 p.m. on Saturday.

The fifteen persons in the car included eight men, four women and three children, all of whom died in the accident.

A resident of the area who rushed to the scene of the crash, described the scenario as touching, saying the women were seen hugging their babies even in death.

The driver of Saturday’s truck with registration number XA 779 NSR, identified as Isyaku Umar, has been arrested.

The victims were buried on Sunday morning.