Even as the likes of Lil Kesh and Adekunle Gold have left YBNL, Olamide, the owner of the record label says he still sees them as his brothers.

Lil Kesh and Adekunle Gold were relatively unknown until they met the self-acclaimed king of the streets, Olamide, who not only put them under his wing but signed them on to his record label, YBNL.

Interestingly, when they became popular, they decided to leave the record label just after a year. Not just a few were shocked at that. Some opined that they were ungrateful for leaving the label after attaining fame, others felt it was not a well-thought-out plan, while a few believed that there would be bad blood especially on the part of Olamide, who had always shown how much he loved both singers, especially Lil Kesh. He once fought on his behalf at the Headies in 2016.

In a chat with Saturday Beats, Olamide said that there was no bad blood between them, referring to the young singers as his brothers. “I feel everyone is entitled to their opinion; I am just living my own dream. It is not about Adekunle Gold or Lil Keshi not being on my label but maintaining a good relationship with them. We have a good relationship as we are brothers, so it is not just about business. Definitely, they would be at my show,” he said.

Speaking on his show, which is to hold in at Teslim Balogun Stadium, the singer explained that he was very excited especially about the venue and he was optimistic that his fans would fill up the 25,000-seat stadium. He said, “My people love me and they are always my people. The kind of relationship that I have with my people is genuine, it is not based on hype because it is very real and organic. I am very sure that everyone who identifies with what is real will come out on that day. I am very excited because this is something I have been dreaming about for over three years.” 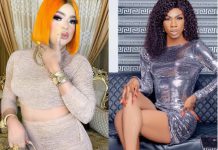