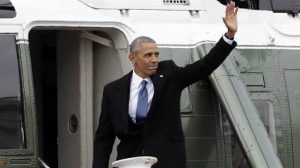 Barack Obama was named the most admired man by Americans defeating President Donald Trump according to the results of an annual Gallup poll. While Hillary Clinton is the most admired woman in America.

Obama led with 17% while Trump, who is suffering brutally low approval ratings as his first year in the White House comes to a close, was second with 14%. In 2016, Obama led Trump by 22% to 15%. Pope Francis was the third-most admired man in the US this year, at 3%,

Clinton, who lost the presidency to Trump in the electoral college despite beating him in the popular vote by nearly three million ballots, was named as most-admired American woman by 9% of Gallup respondents. The second most admired woman was Michele Obama with 7%, while Oprah Winfrey came third. Massachusetts senator Elizabeth Warren took 3% of the vote, just ahead of the German chancellor, Angela Merkel, and Queen Elizabeth II, both with 2%.