Home News Feed Beware Of New Theft Tactics By Hoodlums While Queuing At Filling Stations
Facebook
Twitter
WhatsApp
Millions of Nigerian motorists and other individuals queuing at various fuel stations to buy the scarce products have been alerted by the Nigerian Police over new theft tactics by hoodlums. 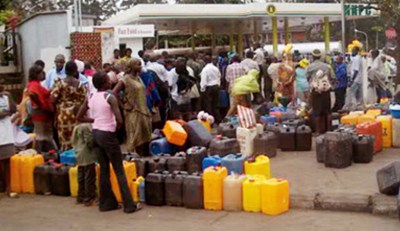 The Plateau State Police command yesterday alerted motorists queuing at various fuel stations in Jos to beware of hoodlums who steal cash and other valuables from vehicles on fuel queues.
The state Police Public Relations Officer, ASP Tyopev Terna, said in a statement that the command was dismayed by the rate of the cases and therefore warned motorists queuing for fuel to be mindful of those who engaged them in any form of conversation while on queues.
While appealing to the public to be mindful of such conversations, the statement noted that, “it may be aimed at diverting the attention of vehicle owners and facilitate access therein for their gang members.”
ASP Tern also warned residents against the use of public transportation from uncertified motor parks.
Meanwhile, the Nigerian National Petroleum Corporation (NNPC), Ndu Ughamadu, on Thursday in Abuja says fuel queues will `normalise’ by Friday and disappear by weekend.
Ndu Ughamadu, the NNPC spokesman, said this in Abuja that there was an increase in the number of incoming trucks of petrol into the FCT to curb the queues in the city.
According to him, the NNPC Group Managing Director, Dr Maikanti Baru, has met with the heads of Nigerian Association of Road Transport Owners (NARTO) and Petrol Tanker Drivers (PTD) to nip the problem in the bud.
He disclosed that a nation that consumed 35 million litres suddenly increased consumption to 85 million litres due diversion to neighbouring countries.
“Dr Baru just today directed that more trucks be moved into the FCT to douse tension and increase supply. He met with NARTO and PTD and they assured that trucks would be closely monitored.
“He said Lagos should be maintained at 300 trucks but the actual figure coming into Abuja should be increased by 150.
“Port Harcourt refinery has also increased refining and so by tomorrow (Friday) queues should normalise and by weekend it would have disappeared,’’ Ughamadu said.