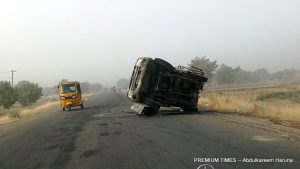 The attack, which occurred in the evening, was repelled by government forces.

As soldiers fought to minimise damage, hundreds of villagers, mostly women and children, fled their communities during the dark hours into the state capital.

According to some of the returning residents of Molai who spoke with newsmen on Tuesday, the gunmen arrived in large number shooting from guns mounted on the back of pickup trucks.

Most of the villagers said they were able to escape. They said only a mentally unstable motor park worker, popularly known called Goodluck, was shot and killed.

Returnees walked over hundreds of empty shells of AK47 and AA bullets that littered the highway.

“We have not seen such terrible incident in a long time,” said a young man in his mid 20s who identified himself as Bashir.

“The Boko Haram gunmen came heavily armed; most of them were carrying AA(antiaircraft) rifles and shooting sporadically. We all took to our heels. I never knew most of us could survive it. Only one man, a Fulani guy who is not that mentally stable but works here at the park as tout helping to get passengers for taxis. He never knew the attack was big so he came out to the roadside only to be shot by the insurgents,” he said.

The corpse of the victim had not been evacuated as it was covered with sac and left by the roadside at the time PREMIUM TIMES visited Molai.

A military truck that was obviously hit by some explosive from the insurgents, was seen standing on its side in the middle of the road leading to Molai, while a burnt motorcycle belonging to the insurgents was also spotted some metres ahead.

The theatre commander of the Operation Lafiya Dole, Rochas Nicholas, said the attack was effectively repelled by soldiers and no life was lost.

He said the insurgents were out to steal food from the civil populace.

The statement by Mr. Nicholas, a major general, which was issued on Monday night, said “No lost of lives to own troops and normalcy has since been restored. Meanwhile troops have been on the trail of the remnants of the terrorists. Unfortunately, during their retreat, they set two vehicles on fire and some thatched houses at the outskirts of the city gate.

“Both ground troops and the Nigerian Air Force are on hot pursuit and interdicting the fleeing terrorists that are now in disarray.”

On the way out of Molai, soldiers of the Nigeria army and operatives of the Civillian-JTF were sighted trying to push the destroyed truck off the middle of the road.