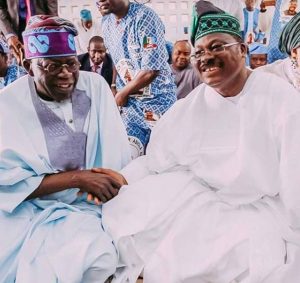 Asiwaju Tinubu on behalf of Governor Ajimobi and the State chapter of the APC recieved some decamping heavyweights into the fold of the party.

A former Deputy Chief of Staff to the Governor of the State, Alh. Rasaq Gbadegesin Kareem and NairaBet boss, Oloye Akin Ala.