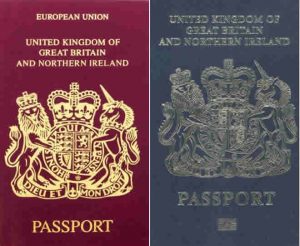 The British interior minister has announced that it will return to a blue and gold passport design after the country leaves the European Union in 2019 “to restore our national identity”.

The country will phase out the current burgundy colour travel document — used across the EU — following Brexit, when it will no longer be required to conform to the bloc’s rules.

“Leaving the EU gives us a unique opportunity to restore our national identity and forge a new path for ourselves in the world,” immigration minister Brandon Lewis said in a statement on Friday.

He added the new passports would be “one of the most secure travel documents in the world” and feature a raft of updated security measures to protect against fraud and forgery.

The current paper-based picture page will be replaced with a new, super-strength plastic polycarbonate material that will be more difficult to alter, according to the ministry.

The new blue and gold design — a return to the colours Britain used for decades following its adoption in 1921 — will be issued from October 2019, when a new contract for passport provision begins.

The existing burgundy passport, in use since 1988, will initially continue to be handed out without references to the EU after Brexit, which is set for March 29, 2019.

Britain’s pro-Brexit tabloid, The Sun, led a campaign “to scrap the EU’s burgundy model forced on the nation”, demanding a return to the “iconic” dark blue passport.

It hailed the decision as “a stunning campaign victory”, with Lewis penning a column for the right-wing newspaper proclaiming the move.

Eurosceptic lawmakers also celebrated the change. “A great Christmas present for those who care about our national identity — the fanatical remainers hate it, but the restoration of our own British passport is a powerful symbol that Britain is back!,” Andrew Rosindell, a Conservative MP, wrote on Twitter.

Others appeared less enthusiastic. “People are more concerned with their jobs, their rights and the economy than the colour of their passport. Plus, why have blue when you can have red?” opposition Labour lawmaker Danielle Rowley tweeted.