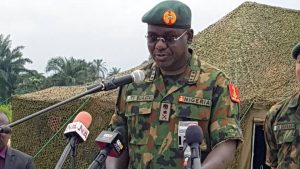 An order has been given by the Chief of Army Staff, Tukur Buratai to begin investigation into alleged extortion of motorists by soldiers on the Maiduguri-Ngaboru Ngala road in Borno.

The Director of Army Public Relations, Sani Usman, said in a statement on Sunday that the order followed complaint by a man, who identified himself as “DanBorno” on his twitter account.

According to Mr. Usman, DanBorno alleged soldiers collected N300,000 from each truck driver to escort the long queue of vehicles on that road.

“Consequent upon this, the Chief of Army Staff, Lieutenant General T.Y. Buratai has ordered for immediate investigation over these allegations.

“The Nigerian Army as a professional military institution thrives on discipline, selflessness and dedication to duty and operates within the confines of the laws, Code of Conduct and Rules of Engagement.

“It would not tolerate any act of misdemeanour by any of its personnel.

“Similarly, we encourage members of the public to take advantage of our toll free telephone number 193 to report any observed lapses or allegation against any officer or soldier,” he said.

The army spokesman also called on the members of the public, especially affected individuals in Borno to cooperate and volunteer information to the investigation team.