Is it possible to turn a one night stand into a permanent relationship? The idea that a one night stand happens causes a few to cringe in disgust. It could happen to anyone right? Mostly for the people who attend first dates. Most of the time, the people who attend these dates usually attend with the mind of getting to know whoever they’re going to see and in the other hand, there are those who attend these dates for the purpose of having one night stands. Moreover, cultural stereotypes suggest that men are more likely to pursue one-night stands than women are. Why? Many believe that having casual sex right off the bat arguably makes it easier to build a strong emotional connection with someone, because you’ve already breaking through a major comfort barrier (i.e., seeing the other person naked). “You already know how that person is in bed. As you get to know each other, it’s just going to get better from there and you have more feelings. You can actually get to know this person,” says Sameera Sullivan, a men’s matchmaker based in Manhattan. Although, different factors like luck, timing, and compatibility obviously play a role in whether a one-night stand can evolve into something more, some might argue that human biology predisposes us to developing deeper feelings for someone we have sex with only once. I came across this article that gives examples of a couple that turned a one night stand to forever.  For many, it is impossible while for others it is a maybe but enjoy the read. 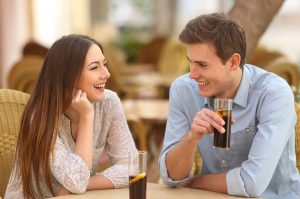 “We’d agreed ahead of time that this was just going to be a general meet-up, so we could gauge interest first and make sure neither of us were serial killers,” says Holmes, 28, an engineer and pole dance instructor in Seattle. “The idea was to move toward something casual, but there was no intention of anything happening this first meetup.”

The night they met, McDonough walked into the restaurant wearing a TARDIS dress, a reference to the cult classic Doctor Who. For Holmes, a fellow Doctor Who fan, it was an obvious sign they had a lot in common. After dinner, they grabbed ice cream and went back to his place to watch Penny Dreadful. That night, they slept together for the first time and discovered they had strong sexual chemistry. They continued to have sex for the next four months, until one day Holmes realized he’d developed feelings for McDonough. At first, he was caught off-guard. This wasn’t what either of them had expected.

“We were spending so much time together and talking more about ourselves and our lives, just even outside of going to each other’s places and banging around for a while, that I think it just steadily developed in the background without either of us realizing it,” Holmes says.

Holmes says having low expectations allowed him and McDonough to establish a level of trust without tacking on pressure to make things work. “From the start, there was a great amount of openness and honesty,” he says. “It felt like it was going to be something temporary, so it was easy to just kind of lay out wants and needs early.”

So can relationships that started out as casual flings actually last? Mark Black, who’s been married to his wife Mary for 29 years, says absolutely. In true When Harry Met Sally fashion, the Blacks met twice — once when Mark was 20 and spotted Mary at a beach in Minnesota, and then again five years later at a broomball tournament. They started talking and eventually began a casual relationship. Mark had already been divorced once, and was “dead set” against getting married ever again. But the more time he spent with Mary, the more he developed feelings for her.

“After we got together, it was like I didn’t have that desire to go out and see or date other girls anymore,” says Mark, 57. “I was thinking, ‘This girl is satisfying all my wants and desires, and we get along great. I don’t know how I can do any better.’”