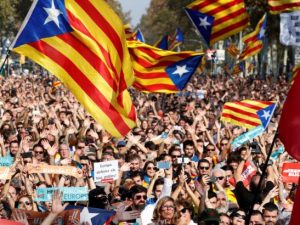 Ahead of December 21st pivotal election in Catalonia on Thursday , candidates have begun campaign from different areas, one candidate was speaking via video conference from Belgium and another sending dispatches from prison, Catalan separatists are engaged in a highly abnormal campaign.

Carles Puigdemont and Oriol Junqueras, the president and vice-president of Catalonia who were deposed by Madrid, have had to resort to alternative ways of campaigning for polls on December 21, when they will be pitted against each other to lead the region.

Puigdemont fled to Belgium after the Catalan parliament declared independence on October 27 and is wanted by Spain on charges of sedition, rebellion and misuse of public funds for his role in the secession drive.

Junqueras — who remained in the country — was jailed pending an investigation into the same charges.

It still remains a mystery how both men will rule from exile or prison, if any of them wins.