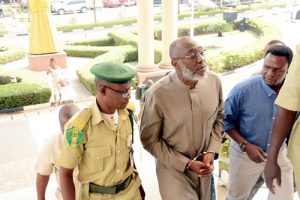 The trial of a former Peoples Democratic Party spokesperson, Olisa Metuh, has been adjourned till January 2018 after the ninth defence witness testified in court on Wednesday.

Mr. Metuh was charged with diverting N400 million from the office of former National Security Adviser, Sambo Dasuki, during the administration of former President Goodluck Jonathan.

He was arraigned before the Abuja Division of the Federal High Court by the Economic and Financial Crimes Commission, EFCC, on a seven-count charge.

He had asked the court to adjourn the case until Mr. Jonathan is served with a court order to appear as a defence witness in the trial.

But the judge, Okon Abang, refused the application, stressing that Mr. Metuh was at liberty to begin the process for the service of a subpoena on Mr. Jonathan through substituted means.

On Wednesday, Mr. Metuh’s counsel presented its ninth witness, Adebayo Bodurin, who works as a Director of News with the Africa Independent Television, AIT.

According to the witness, the money was part of several other sums paid for sensitization of the public on the activities of the then ruling PDP.

The case was adjourned till January 22.