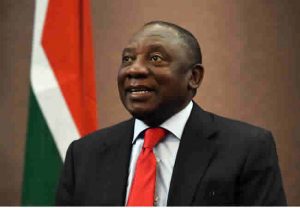 The deputy-president of South Africa , Cyril Ramaphosa, has been elected leader of the ruling African National Congress, a pole position that will make him president of the country in 2019.

Ramaphosa emerged the winner in the tightest election for the party leadership ever, beating Nkosazana Dlamini-Zuma, President Jacob Zuma’s former wife and chairperson of the African Union.

Another election for the country’s presidency is not due until 2019.

Zuma backed his wife, who was also a former minister under Nelson Mandela and Thabo Mbeki.

Mr Ramaphosa, a former trade unionist and businessman campaigned on a promise to root out corruption and save the ANC from losing its majority for the first time at the 2019 election.