Still in the controversial debate about tithing, veteran Nollywood actor Zack Orji has also come out to share his opinion on this same issue. The movie star in an interview disclosed that people should stop condemning the payment of tithes adding that, it is not right to say negative things about men of God and the holy bible. Zack Orji did not stop there but further revealed that he has been a pastor for five years and the payment of tithe is a personal thing.

He said: “I am a pastor, ordained for five years now. The issue of tithing is a personal thing. I get very careful about making certain statements I have watched some people condemn tithing, say a lot of things about men of God and I pity some of those people because they are speaking out of ignorance. It is a terrible thing to go on the social media and be condemning men of God and be condemning something that is in the bible.”

Following Zack Orji’s statement, controversial Nigerian radio presenter Daddy Freeze came out saying that, all he needs is for pastors to show him the bible verse that says Christians should pay tithes in church. Daddy Freeze said: “Pity will not solve this dilemma sir, all we need is scriptural evidence of where Jesus our High priest under the order of Melchizedek collected tithe, or where our first pastors, the disciples and apostles collected tithe or where believers who weren’t Jewish paid tithe, simple!” 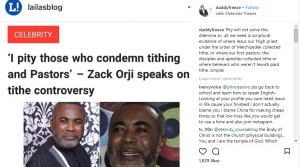