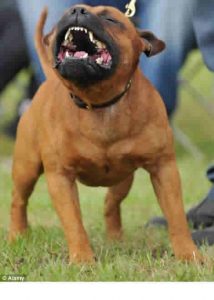 A woman has been jailed after her dangerous dog savagely attacked 12 children in a park playground.

Claire Neal, 39, allowed her brown and white Staffordshire bull terrier, named Marley, to escape from home and carry out the terrifying attack in Blyth, Northumberland.

There was already a destruction order in place on the animal after two previous attacks on children.

Prosecutor Fiona Clancy told Newcastle Crown Court that on May 18, 2016, the dog had been let into the front garden with no muzzle or collar on and it squeezed under the front gate.

A teenage girl had then come across it in the street when she was playing with friends and had wanted to take him home so her mother could contact the RSPCA, an animal welfare charity.

But the terrier went wild as they passed the park in Burns Avenue, with neighbours rushing out of their homes to help.

The court heard how the attack unfolded with the dog chasing children, jumping on them as they tried to flee and holding them on the ground.

Statements from the children were read out, with one girl saying she fainted after the dog closed its jaws on her.

Another child said he saw a girl being dragged by the dog while screaming. One parent described their child’s leg as looking like “Swiss cheese,” full of puncture holes and a big gash.

Panicked parents attempted to lift children to safety, either over the fence or onto the climbing frame, with two men eventually able to tie the dog up.

Jailing her for four years, Judge Sarah Mallett said it was a “sustained and repeated attack” and that Neal’s actions were “utterly irresponsible on every level.”

Mallett said Neal had failed to put in place any control measures and the dog had been trained to be aggressive by Neal’s partner.

She added: “It’s clear from these descriptions there was serious injuries but it is also clear there was significant psychological harm.”

Jailing her for owning a dog that was dangerously out of control, Judge Mallet also disqualified Neal from owning a dog for life.

The dog has since been destroyed.

Sharon Elves, from the Crown Prosecution Service, said: “All dog owners must ensure that their animals are under control at all times and there are significant penalties, including imprisonment, for those who are negligent in these responsibilities.

“Had the dog been destroyed in accordance with the earlier court order, then this attack would never have taken place.”