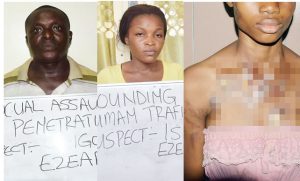 A victimized 19-year-old teenager, identified as Blessing, is undergoing treatment at a hospital in Lagos after she was bathed with hot water by her employer, Mrs. Isioma Ezeofor, who accused her of having a sexual relationship with her husband, Mr. Chigozie Ezeofor.

It was  learnt that the victim, who hails from the Mbano Local Government Area of Imo State, lived with the couple at their home on Aunty Toyin Street, Kodeibo Estate, in the Isheri Oshun area of the Lagos State.

She was said to have been employed as a maid about six months ago by the Ezeofors, who hail from the Akokwa area of Imo State.

It was learnt that while Chigozie, a tyre dealer, sexually assaulted Blessing, the wife, Isioma, physically assaulted her for the least offences.

Matters were said to have come to a head on Sunday, when the woman returned from a trip and caught the husband caressing Blessing at their home.

She was alleged to have beaten the maid to a pulp before pouring hot water on her.

A Good Samaritan was said to have alerted policemen in the area to the incident, leading to the arrest of the couple.

The victim was subsequently taken to a hospital for treatment.

A police source said, “Since she arrived at their house, it had been one assault after another. According to the victim, when she arrived, the man pretended to be interested in her welfare and asked if she was a virgin. She said when she told him that she was a virgin, he started touching her at every opportunity.

“The victim told us that while the sexual assault persisted, she was helpless because she had nowhere to run to. She was a victim of trafficking. Her guardian had handed her over to the family and her salary was what they were using to send her to school. She is in Junior Secondary School three.”

The source said the woman had left the girl and her husband at home on Sunday, December 17, and came back earlier than planned when she met the husband caressing Blessing.

“The woman claimed that when she saw the husband with Blessing, she became angry and beat her up before pouring hot water on her,” the source added.

The state Police Public Relations Officer, Chike Oti, confirmed the incident, adding that the campaign of the state Commissioner of Police, Edgal Imohimi, against abuse of the girl child, women and the juvenile, was yielding fruit.

Oti, a Superintendent of Police, said the couple were in police custody and would be charged with trafficking and sexual assault at the end of investigations.

He said, “The case was reported at one of our divisions. The victim said she had suffered terribly in the hands of the couple, who delighted in dehumanising her regularly. She further revealed that her mistress, Isioma Ezeofor, beat her up at the slightest provocation, while her husband, Chigozie Ezeofor, sneaked up to her whenever his wife was away.

“The exploitation came to a head when Mrs. Isioma Ezeofor’s temper got the better of her and thus she emptied a kettle of hot water on the poor girl, scalding her in the process. Both husband and wife are being interrogated at the gender section of the Lagos State Police Command and would be charged to court at the end of investigation.”

He said the state CP was encouraged that more victims of domestic and sexual abuses were speaking up. 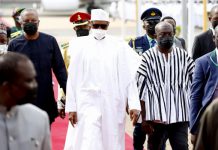