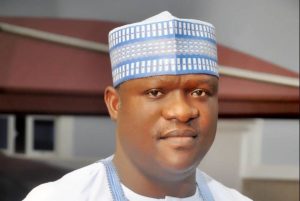 A former acting governor of Taraba State, Sani Danladi had defected from the Peoples Democratic Party (PDP) to the All Progressives Congress ( APC ).

Mr. Danladi, alongside his supporters, will today in his Bachama ward, Karim Lamido Local Government Area, announce his move.

“Yes as I am talking to you now, we are on our way to my local government where I will this Tuesday defect to APC, from ward level to local before state,” the former acting governor told PREMIUM TIMES in a telephone interview.

Messrs. Umar and Danladi hail from the same local government and constituency.

Mr. Danladi, who was recently removed from the Senate as lawmaker representing Taraba North, following a Supreme Court verdict , was said to be at loggerhead with Governor Darius Ishaku.
He has, however, denied this.

“I’m not at loggerhead with anyone, but politics is all about interest, and this is where my people want me to go and bring change in the political landscape of our dear state.”

“No, we are not rattled at all, let him go, PDP wishes him luck,” David Dogo a PDP chieftain in the state said.

Mr. Danladi, a grassroot politician, started out as a counsellor, then chairman and finally deputy governor of the state during the late Governor Danbaba Suntai administration.

Though he was later impeached, he won his case at the Supreme Court and was reinstated as deputy governor.

He eventually became governor in an acting capacity and then emerged the PDP flag bearer in the controversial Wadata Plaza primary election for the seat of the senator to represent Taraba state, Northern Senatorial District, until a Supreme Court judgment ruled in favour of Shu’aibu Isa Lau.