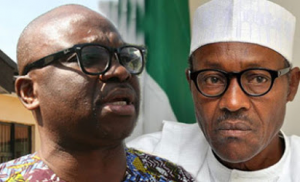 Governor of Ekiti State, Ayodele Fayose, accused the Federal Government of deliberately causing the current fuel scarcity so as to be able to justify the planned increment of the pump price of petrol from N145 to N185 per litre.

He accused the Federal Government of being insensitive to the plight of Nigerians by allowing the scarcity to continue for two weeks now.

The governor stated this in a statement by his Special Assistant on Public Communications and New Media, Lere Olayinka, on Sunday.

Fayose said, “Petrol is scarce across the country because the Federal Government deliberately reduced supply since it is only the NNPC that is importing the product.

“Allowing fuel scarcity to persist for over two weeks when Nigerians are preparing to celebrate Christmas and New Year is the height of wickedness on the part of the All Progressives Congress Federal Government.

“Funny enough, instead of directing its anger on President Muhammadu Buhari, who is the Minister of Petroleum, on December 7, 2017, the Federal Executive Council chose to give the Minister of State for Petroleum, Dr. Ibe Kachikwu, a seven-day ultimatum to end the fuel scarcity.

“Today is December 17, exactly 10 days after the misplaced ultimatum was given, the situation has even got worse.”

“By the time the Petroleum and Natural Gas Senior Staff Association of Nigeria goes on strike as being threatened, the whole country will be shut down and one wonders what will become of Nigerians who desire to move around during the festive season.”

Fayose, who said it was necessary for the government to tell Nigerians the truth about the situation of fuel supply in the country, noted that it was the restriction of supply to the NNPC alone that had put Nigerians in hardship.