It was a sad day for the mother of two children as she lost her kids due to fire, the kids were aged three years and 2 months old identified as Emmanuel Samson  and Rosemary Samson who both reside in Sosanya Street, Ifako, Gbagada, Lagos State.

The victims were reportedly killed by a stove fire in their parents’ one-room apartment around 10pm on Monday.

It was learnt that their father, Otunimi Samson, had not returned from work at the time of the incident, while their mother, Mercy Samson, was said to have gone to buy sugar at a shop on the street.

Mercy reportedly locked up the children inside the room.

PUNCH Metro learnt that the woman, after buying the sugar, went to another shop to visit a friend for about 30 minutes.

It was gathered that she was at the shop when neighbours rushed to call her that the apartment was on fire.

Our correspondent was told that officials of the Lagos State Fire Service from the Ilupeju Fire Station joined the residents in putting out the fire.

PUNCH Metro, who visited the affected apartment on Tuesday, saw burnt clothes, a damaged stove and a burnt pot of rice.

The apartment was a makeshift plank structure attached to a building.

The parents were not on the ground while most of the neighbours had also gone to work on Tuesday.

However, a neighbour, Kehinde Jay, said 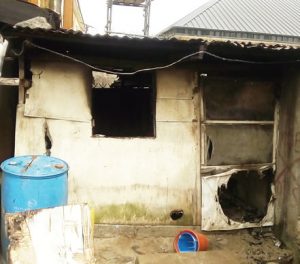 the incident was avoidable.

He said it was a resident who was returning from work that noticed smoke billowing from the apartment and raised the alarm.

Jay explained that residents rushed to rescue the children, adding that the door was locked. He said Emmanuel screamed for help as the fire raged.

Jay said, “Iya Emmanuel (Mercy) went out to buy sugar and went to her friend in a shop on the street. A resident, who was returning from work, said he saw flames and heard Emmanuel screaming. He tried to open the door, but failed. He then came to call me and other neighbours.

“When we got there, the fire had escalated and we could not open the door. I was outside when the woman was going out and I thought that she was back, not knowing that she was with her friend on the street. Emmanuel tried to open the door, but the door was locked.

“Her husband returned home drunk and for some time, he was not aware of the incident. It was later that he started lamenting the deaths.”

Jay explained further that when Mercy returned, she said she was delayed where she went to buy the sugar.

He said, “When the Divisional Police Officer of the Ifako station asked her why she did not go with the baby, she said she was not in a mood to answer any question. She later said it was the woman who sold sugar to her that delayed her.”

Another resident, Remi Ladipo, said the couple “disappeared” from the area shortly after the incident.

“Iya Emmanuel is in her early 20s. Emmanuel was three-year-old, while his sister was just two months old,” he added.

The Director, Lagos State Fire Service, Mr. Rasaq Fadipe, said a preliminary investigation indicated that the bed, on which the baby was laid, caught fire from a burning stove in the apartment.

Fadipe urged residents to avoid cooking near inflammable household items, noting that a distress call should be promptly put across to the agency whenever there was a fire incident.

He said, “It was suspected that the mother was cooking in the house. The stove was close to the bed which was consumed by the fire. When a foam mattress goes up in flames, it is very injurious to health. The fumes it produces are very toxic. That could have led to inhalation of toxic fumes by the children.

“People should stop cooking in living rooms. It is very dangerous. Even when you cook in a kitchen, make sure flammable materials are not close to the naked light. When you are cooking, you don’t leave it unattended to. The mother of the deceased was not at home when the apartment was gutted by fire.”

The Lagos State Police Public Relations Officer, SP Chike Oti, said the corpses of the children had been deposited in a morgue.

“Investigation is ongoing into the incident,” he added.