Floyd Mayweather certainly had a great 2017. After beating everyone he had ever faced in his career, he took on an unusual opponent in UFC fighter Connor McGregor. We all know how that ended: that was the 50th win on Mayweather’s career.

Now retired, his next move is no joke: he wants to play a basketball game against Kobe Bryant- who’s regarded as one of the five basketball players ever.

Bryant who recently got his two jerseys retired at the Los Angeles Lakers-where he played for the entire twenty years of his career, was challenged by Floyd who commented on an Instagram post of his saying ‘I’m ready to play you one on one for $1,000,000.’

At press time, Kobe had not replied if he’s interested in the (mis)match-up but it’s not hard to predict the outcome of such a game- if it does happen. With five championship rings, Kobe Bryant has been a basketball icon for twenty years. And there’s the little matter of the height disparity: Mayweather for all his gruffness is 5.8feet tall. Kobe is 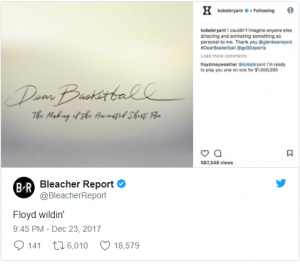