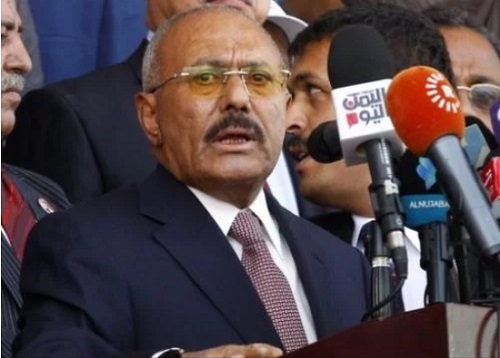 Yemen’s ex-president, Ali Abdullah Saleh has been killed by Houthi rebels near the capital, Sanaa, a development expected to have major implications for the war in the Arab world’s poorest country.
The death was first announced on Monday by the Sanaa-based interior ministry, controlled by Saleh’s allies-turned-foes, the Houthi rebel movement.
His killing was later confirmed to Al Jazeera by Saleh’s political party, the General People’s Congress (GPC).
Footage circulating on social media appeared to display a body resembling Saleh, with one video showing how armed militiamen used a blanket to move the corpse into the back of a pick-up truck.
There were earlier reports that the Houthis blew up one of Saleh’s houses, after storming the property. Houthi sources said Saleh was killed by the rebels in a rocket-propelled grenade and shooting attack on his car at a checkpoint outside Sanaa.
Yasser al-Awadi, the GPC’s assistant secretary-general, was also killed.
In a statement read out on a Houthi television network, the interior ministry announced the “killing” of “Saleh and his supporters”.
“This is after he and his men blockaded the roads and killed civilians in a clear collaboration with the enemy countries of the coalition,” the statement said.
The ministry also said its forces had “taken over all the positions and strongholds of the treacherous militia in the capital, Sanna, and the surrounding areas, as well as other provinces in order to impose security”.
Sources close to Saleh told Al Jazeera that the head of the former president’s security detail, Hussein al-Hamidi, was also killed, but did not provide further details.