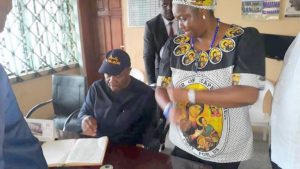 The Senate Minority Leader and former governor of Akwa Ibom State , Godswill Akpabio, spent his Christmas at theIkot Ekpene Prisons, Akwa Ibom State, on Monday, to celebrate the Christmas with the inmates.

Mr. Akpabio’s media aide, Anietie Ekong, who posted photos of the visit on Facebook, said the senator was accompanied by his wife, Ekaette.

Mr. Ekong said there were about 861 inmates in the facility.

The senator, who is a former governor of the state, ate and drank with the inmates and also donated food items and drinks to them, Mr. Ekong said.

Mr. Ekong said after listening to inmates speak about the living condition inside the prison, the senator donated 300 mattresses and also gave money for the repairs of the prisons vehicles to enable the inmates to be taken to the court.

Meanwhile, Akwa Ibom people have been urged to use the Christmas period to embrace unity and show love to one another.

The State Governor, Udom Emmanuel, in his Christmas Day message to the people, said, “As God showed us love, let us also show love; not only to our family members and friends but also to our neighbours, the needy, the widows, the handicapped.

“It is in doing this that you will fulfill the essence and reason for this season,” Mr. Emmanuel said.

“We must remember that what brought down the walls of Jericho was not only that the children of Israel sang. It was while they sang and walked together that the walls fell down flat
“Let us continue to walk together, hand in hand, and allow the immortal words of Abraham Lincoln ring true that even though we may have political differences, even though we may see things through different prisms, we should show ‘malice toward none, with charity for all’.”

The governor said that his administration was committed to the unity of the “blessed” state.

“I have always said that I am not against constructive criticism. It is a desirable ingredient in any democratic culture, but such criticism should not be coloured by mischief, malice, and hatred. I charge our people to use this season of goodwill, to commit themselves to politics of ideas, of inclusion and eschew divisive tendencies.”