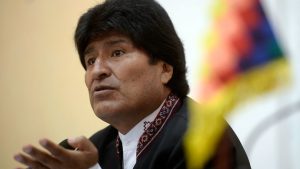 The Guatemala government has began the process of moving its embassy in Israel to Jerusalem after President Jimmy Morales announced he would follow US President Donald Trump’s controversial lead on the holy city.

Morales wrote a message to Guatemalans on his Facebook page Sunday, saying he had spoken with Israel’s Prime Minister Benjamin Netanyahu and that “one of the most important topics was the return of Guatemala’s embassy to Jerusalem.”

“For this reason I am informing you that I have given instructions to the foreign ministry… to make this happen,” Morales wrote.

On Monday, the foreign ministry said it was implementing the order.

“The Ministry of Foreign Affairs received the presidential order and is starting the process of implementing this foreign policy decision,” it said in a statement.

Guatemala’s leader made the embassy announcement on Christmas Eve, three days after two-thirds of UN member states rejected Trump’s decision to have the United States recognize Jerusalem as Israel’s capital.

Netanyahu on Monday hailed the decision, saying Guatemala would not be the only nation to follow Washington’s lead.

“Other countries will recognize Jerusalem and announce the relocation of their embassies. A second country did it and I repeat it: there will be others, it’s just the start and it’s important,” Netanyahu said in a statement.

Israel’s deputy foreign minister Tzipi Hotovely told public radio that “we are in contact with at least 10 countries, some of them in Europe” over the possible transfer of their embassies to Jerusalem.