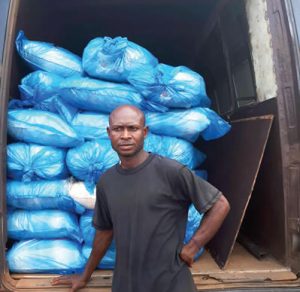 A 41-year-old man, identified as Ojuneme Festus, who was arrested for allegedly smuggling 200 kilograms of cannabis sativa, confessed that hunger and poverty pushed him indulge in the criminal act.

Festus, a father of four from ‎Ndokwa-East Local Government Area of Delta State, was arrested by men of the National Drug Law Enforcement Agency after the illicit substance was found in his vehicle.

Southern City News learnt that the illicit drug was packed in 20 sacks and concealed in a false compartment lined on the inside wall of a dark-blue Volkswagen bus with registration number, ACA 711 XT.

It was also learnt that the items were being conveyed to Uko-Orji in Imo State before the interception by operatives of the agency in Ehor.

The suspect, a resident in the Oluku area of the Benin metropolis, told officers of the agency that he took to smuggling when he could not secure a stable job, with his 15-year driving experience.

He also said that the operatives took him by surprise as he thought that he had the substance concealed.

“It was in the process of looking for food for my family that l accepted to smuggle cannabis. Shortly after l took off, my bus was stopped at Ehor by NDLEA officers on patrol.

“The drug was well-hidden but l was surprised when the officers discovered the drug in a false compartment,” Ojuneme said.

However, the State Commander of the NDLEA, Mr. Wakawa Buba, said that the suspect was aiding narcotic officers in the agency with the investigation.

Buba also assured that Ojuneme would be prosecuted for unlawful transportation of cannabis under the NDLEA Act while the bus used in conveying the items would be forfeited to the Federal Government.

The commander warned that other drug trafficking cartels would not go unpunished as the command was working to detect drugs and apprehend offenders within the state.

Buba added, “This is a very interesting seizure because, ordinarily, it is difficult to detect the drugs, considering the manner it was hidden.

“The bus was empty as it were; but it took the superior techniques and experience of the officers to disable the stratagem employed by the drug trafficking cartel.”