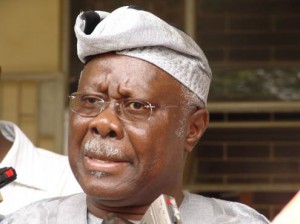 One of the aspirants of the national chairmanship position of the Peoples Democratic Party, Chief Olabode George, has pledged to unite all rival groups within the party across the country and enthrone peace and harmony if elected.

He made the promise while addressing Ogun State delegates for the national convention of the party and other stakeholders at the Park-Inn Hotel, Abeokuta, Ogun State on Monday.

He said he would bring all groups together and ensure that all litigations involving the party were amicably resolved as the PDP could not afford to waste the little time between the convention and the 2019 elections on unnecessary infighting and distractions.

He noted that the PDP lost Ogun State to the All Progressives Congress years ago because of disunity, adding that the time had come for all to come together and take the state back.

George had also made the same promise in Ekiti, Ondo, Osun and Oyo states which he visited between Friday and Sunday.

He assured the party stakeholders that unity was a top priority in his agenda for the party because it was a necessary ingredient for a strong and formidable platform to win elections.