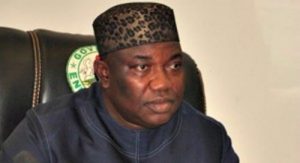 The governor, while presenting the budget, explained that the proposed 2018 appropriation bill was smaller than that of 2017 by about N7bn.

He explained that the reduction was occasioned by ‘current economic realities’ in the country.

Out of the proposed N98bn budget estimates, about N60bn was earmarked for recurrent expenditure while N30bn was set aside for capital expenditure.

Giving an overview of the implementation of the 2017 budget, Ugwuanyi said his administration embarked on massive infrastructural projects in the outgoing year.

He disclosed that about 26 road projects were inaugurated while many others were under construction.

Ugwuanyi added that in spite of the economic downturn experienced in the country in the outgoing year, his administration made interventions in various critical sectors such as health, education, water resources, rural development, urban renewal and security.

Some of the road projects undertaken by the state government, according to the governor, include the Opi-Nsukka Dual Carriage Way, the Ninth Mile-Nsude-Amah Brewery By-pass, the Emene Old Road from the Akanu Ibiam International Airport to Ekeh Obinagu, and some failed portions of federal roads in the state, such as the Nsukka-Obollo Afor highway.

Ugwuanyi assured the people that his administration would deliver more dividends of democracy to the residents of Enugu State in the coming year.

Responding to the governor’s address, the Speaker of the Enugu State House of Assembly, Edward Ubosi, assured Ugwuanyi that the House would give urgent attention to the appropriation bill.

Nigeria At War Because Of Betrayal By ‘One Section’ —Gani Adams

Lawan: Since Civil War, Our Military Hasn’t Been Involved In Warfare Like Now