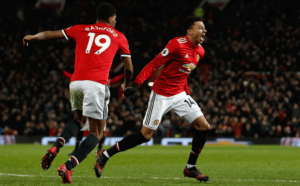 Manchester United have been under pressure for the past couple of games, as the Red Devils are losing pace on their city rivals, Manchester City in the race for the Premier League title.

Jose Mourinho was spared his blushes on Tuesday as two goals from Jesse Lingard saved his team from going down to a shock defeat against Burnley at Old Trafford.

The thrilling encounter ended in a 2-2 draw but United are now 12 points behind Manchester City who with a game at hand can extend their advantage at the top to 15 points.

Elsewhere, it was a good outing for Victor Moses and his Chelsea teammates as they eased past Brighton 2-0 with Alvaro Morata scoring on his return from suspension.

Huddersfield and Stoke drew 1-1. Alan Pardew was still without a win after six games in charge of West Bromwich Albion besides a goalless draw with Everton.

On their part, Watford ended a run of six games without a win as they came from behind to defeat Wilfred Ndidi’s Leicester 2-1.