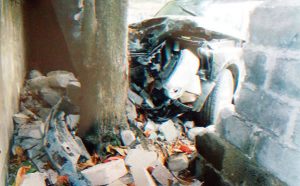 A lotto agent, identified as Ogechi Okeke, and his friend, Rasak Sanni, crashed his Range Rover Jeep into a hospital along the Costain-Oyingbo Road, Lagos.

It was learnt that the owner of the Jeep, Rueben Muoka, had taken it to Sanni for repairs after its air conditioner developed a fault.

Sanni, who repairs air conditioners, reportedly gave the vehicle’s keys to Okeke for safekeeping till the following day when he (Sanni) would conclude work on the car.

However, the lottery agent, who had no driving experience and was under the influence of alchohol, drove the vehicle.

He was alleged to have crashed the Jeep into the wall of the hospital.

The owner of the vehicle reported the case at the Railway Police Command and the two friends were arrested.

They were arraigned before an Ebute Meta Magistrate’s Court on six counts of wilful damage, negligence and breach of the public peace.

The charges read in part, “That you, Ogechi Okeke, on December 14, 2017, about 5am, along Costain-Oyingbo Road, Lagos, in the Lagos Magisterial District, wilfully and unlawfully drove and damaged a Range Rover Jeep, with number plate, KJ A143 CK, valued at N2.5m, property of one Mr. Rueben Muoka, thereby committing an offence punishable under Section 339 of the Criminal Law of Lagos State, Nigeria, 2015.

“That you, Rasak Sanni, on the same date, time and place, in the aforesaid magisterial district, being an automobile air conditioner repairer in custody of a Range Rover Jeep, valued at N2.5m, property of one Rueben Muoka, handed over to you for repairs, did unlawfully and negligently handed over the said vehicle and its keys to one Ogechi Okeke, who drove same and caused serious damage to the said vehicle, thereby committing an offence punishable under Section 252 of the Criminal Law of Lagos State of Nigeria, 2015.”

The defendants pleaded not guilty to the counts and elected summary trial.

The defence counsel, Tunde Idris, asked for their bail in liberal terms.

But the police prosecutor, ASP E. A. Moses, urged the court to remand them in custody, saying they had no fixed address.

Idris, who opposed the remand application, said the parents and family members of Sanni were in court.

He, however, stated that he met Okeke a few minutes before the court sitting.

The lawyer insisted that it was within the constitutional rights of the defendants to be admitted to bail.

While responding to queries from the magistrate, Okeke said his family members were not around because they were not aware of the incident. He said he drove the Jeep to show off.

The magistrate, T. Elias, admitted them to bail in the sum of N100,000 each with two responsible sureties each in like sum.

“The sureties must be workers with the Lagos State Government. One of them must also be a blood relation with evidence of tax payments to Lagos State. The surety for the first defendant (Okeke) must deposit N200,000 into the account of the Chief Registrar of the Lagos State High Court,” he added.