Home News Feed Man Confesses To Killing Two Sisters After His Death Sentence Was Called...
Facebook
Twitter
WhatsApp
A man from the United States who reportedly killed two sisters has confessed to the crime after his death sentence was overturned. 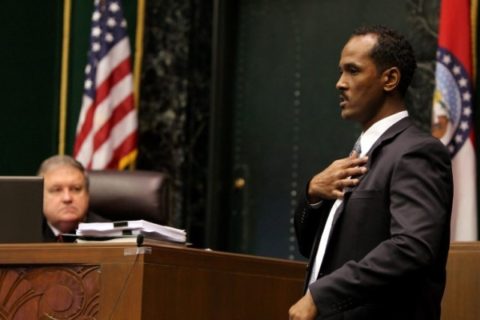 A former US death row inmate, whose conviction in the r*pe and killing of two sisters was overturned, admitted to the crimes on Monday after decades of denial and was resentenced.
Reginald Clemons of the state of Missouri pleaded guilty as part of an agreement with prosecutors to spare him the death penalty. The 46-year-old was given life in prison on five counts of rape, murder and robbery.
Clemons and three accomplices were tried and convicted for the 1991 killings of Julie and Robin Kerry — two sisters in the city of St Louis who were 20 and 19 years old, respectively.
The sisters were thrown off a well-known St Louis bridge that was a historic part of the famed Route 66, according to authorities.
Clemons had served 22 years on death row, with supporters rallying to his cause, saying his initial trial had not been fair. His sentence was overturned in 2015 on the grounds that police beat him into confessing and hid some evidence.
Prosecutors decided to retry the case.
“I hope that this guilty plea brings some measure of peace to the… families and the community as a whole,”Missouri Attorney General Josh Hawley said in a statement.
St Louis prosecutor Jennifer Joyce, who made the decision to retry Clemons, said many were taken in by his years of “false claims of innocence.”
“Clemons is a monster to put the victims’ family through this decades-long ordeal, knowing he was guilty of these unspeakable crimes all along,” Joyce said, according to the St Louis Post-Dispatch.
Of the three others accused of the killings, Marlin Gray was executed in 2005, while Antonio Richardson and Daniel Winfrey are serving prison sentences.