Deolu
A hospital has been caught in a difficult situation after a weird tattoo was found on the chest of a man who was already unconscious. 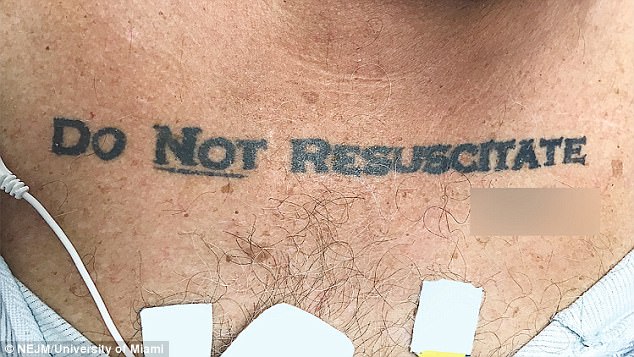 A man’s ‘do not resuscitate’ tattoo forced Miami emergency doctors to confront the ethical conflict between a patient’s wishes and a doctor’s duty.
The 70-year-old man was unconscious and presumably drunk, given his elevated blood-alcohol level, when paramedics brought him to the emergency room.
His pulse slowed to a worrying rate, and the doctors decided to try to save him any way, but were getting no responses, according to a case study published in the New England Journal of Medicine.
After consulting with ethicists, the doctors decided to respect the man’s tattoo, but the quandary made them aware of the need for an updated system of tracking patients’ end of life wishes.
Paramedics brought the senior to the University of Miami hospital emergency room after finding him on the street.
The man had alcohol in his system and couldn’t be roused, but none of that was terribly unusual.
‘Unfortunately, we get a lot of that kind of patient at my hospital,’ says Dr Greg Holt, one of the doctors who treated the man.
The man’s tattoo was, however, unique enough to draw Dr Holt, who was the attending physician that night, and his entire team of eight down to the emergency to see what the fuss was all about.
The man a signed ‘do not resuscitate’ on his chest, with a line under the ‘not’ for emphasis.
‘We always kind of joked around about doing that. A lot of physicians say “Boy, I’m going to have that tattooed on my chest so everyone knows my status.” Then you see it and…holy crap,’ says Dr Holt.
The team’s first concern was legality.
Tattoos are not legally-binding DNR orders. In fact, says Dr Holt, there are very specific requirements for legal orders in Florida.
‘It has to be on yellow paper, both the doctor and the patient have to have signed it…it doesn’t say anything about tattoos.’
DNR orders are protected by medical privacy laws, so it’s unclear how many people have them, but about 80 percent of Americans with chronic illnesses reported that they did not want to be hospitalized or put into intensive care if they were dying.
People who want DNRs have to fill out standard forms with their doctors, then DNR is written on the medical chart, and they can get bracelets or wallet cards showing their status. These wishes are usually reiterated in a will.
Dr Holt’s patient blood pressure dipped dangerously low. Dr Holt and his team decided that it was better not to risk the outcome that could not be undone: death.
Walking a fine line, they gave the patient IV fluids, antibiotics, and ‘some medications to keep his blood pressure up, which some people would consider resuscitation,’ says Dr Holt. ‘If I knew that he was no code, I would have put him on a breathing machine,’ Dr Holt adds.
But with a tattoo, ‘I always kind of thought people might regret it later on, you get drunk, you get it when you were a kid, you wish you didn’t, but what can you do?’ says Dr Holt.
In fact, in another case study, a doctors discovered a tattoo reading ‘D.N.R.’ on the chest of a diabetic man in the hospital for a leg amputation. When his doctors asked about the ink, the man said that it was the opposite of his wishes.
The patient, a hospital worker had lost a bet when he was younger, agreed to the tattoo but, according to the case study, ‘did not think anyone would take his tattoo seriously.’
Dr Holt says his patient’s tattoo seemed quite different.
The hospital’s ethics team came to consult with the doctors, and together they decided that the tattoo most likely did represent the patient’s true wishes.  For one, the man’s apparent signature was included.
Dr Holt also says the placement of the tattoo mattered. ‘It was exactly where you would have to do chest compression, the guy had to have had some knowledge of the medical system,’ he says.
But really, the team was confronting a deeper question.
‘One way is to say “we don’t know [his wishes] so forget [the tattoo]”. The other way is to say we are being too dogmatic,’ says Dr Holt.
He says that ‘it’s really  hard for patients to have their end of life wishes known,’ and this man, he and the ethics team concluded, had taken matters upon himself, literally.
Luckily, two hours later, they found documentation confirming that the tattoo was correct and the man had signed a DNR order.
The patient took a turn for the worse, and the doctors let him go, but it was a wake up call to Dr Holt.
DNR orders are still on paper, and just as the man could have changed his mind after getting his tattoo, patients may change their minds before having an opportunity to change their resuscitation status.
‘It’s a concern for both physicians and patients because you want to do right by someone and if you don’t know, you do everything you can think of because we always pick the reversible choice, not the one you can’t take back when faced with uncertainty,’ he says.