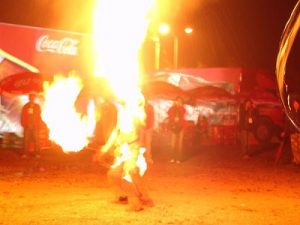 A woman in southern India died from burns on Friday after a man she turned down set her on fire on a crowded main road, police said.

The 25-year-old died after the man doused her in petrol and set her alight in Secunderabad city in southern Telangana state on Thursday.

Hearing her screams for help, passersby ran to put out the fire and rushed her to a hospital where she was admitted with 60 percent burns, investigating officer Srinivasa Rao said.

“She succumbed to her burn injuries this morning,” Rao told AFP by phone.

“Both of them had known each other for the last two years. The boy was under the impression that this girl was in love with him but when he found otherwise, he could not tolerate the insult.”

The man was arrested Thursday night, before his victim died, and was initially charged with several offences including attempted murder and molestation.

He is believed to have been in love with the victim and had begun to harass and stalk her when she showed disinterest, according to the Press Trust of India citing an unnamed police official.

The latest case adds to a grim record of crimes against women in India where reported offences have risen dramatically, particularly after the fatal gang rape of a 23-year-old woman in New Delhi in 2012.

In September, an 18-year-old was beaten by her former boyfriend and his father over a soured relationship before being burned to death in western Rajasthan state.