Deolu
Some militants have attacked a community in Calabar, causing serious commotion in the area and leaving heartbreak behind. 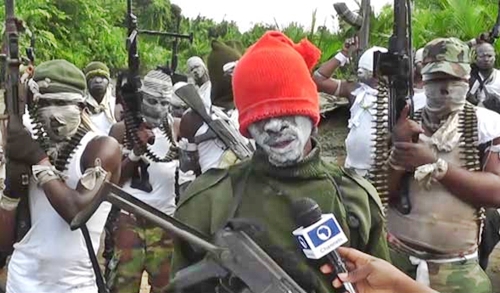 No less than two persons were feared killed, yesterday morning, as suspected militants attacked Jebs area of Anantigha community in Calabar South Local Government Area, Cross River State, Vanguard reports.
A resident said the suspected militants came from one of the many creeks in the area and opened fire from a gunboat they came with, on residential buildings along Bassey Effiom Street by Jebs Street.
It was gathered that the area is notorious for bunkering activities and it was suspected that the militants probably came for the bunkerers, who stayed along a beach known as Offshore.
The source said: “The militants came from the creeks with a gunboat and just started shooting at a beach, where the bunkerers normally stay.
“As I speak with you, two people I personally know are dead. Others with gunshots wounds are in critical conditions. I hope they survive.
“Nobody expected such situation on a Sunday morning. We were running all over the place to save ourselves. It was complete pandemonium.”
It was learned that the militants, thereafter, escaped through the creeks in their boat. Public Relations Officer of the 13 Brigade of the Nigerian Army, Calabar, Captain Kayode Owolabi, said they got information of militants shooting in the area and immediately deployed men to repel them.
He said in the process one of the militants was killed and a pump action rifle recovered, adding that the corpse of the militant had been handed over to the Police.