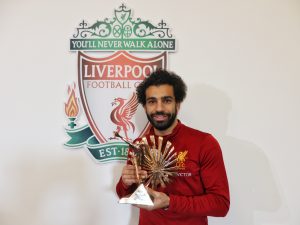 Liverpool and Egypt star Mohamed Salah has been named BBC African Footballer of the Year for 2017, The Express reports.

Salah emerged victorious to scoop the prize in a star-studded five-man shortlist.

Salah said, “I have always followed my way, and I want everyone in Egypt to follow my way.

“Since I left Egypt, in my mind, I want to be the best Egyptian ever.

“I work hard and try to be different from them.”

While Salah has made a name for himself at Liverpool since his summer move from Roma, his biggest achievement to date came for his country.

The Egyptian scored a late strike against Congo in October to ensure his country qualified for their first World Cup in over a quarter of a century.