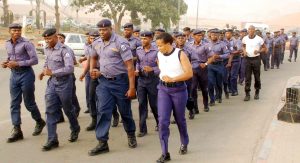 The Nigerian Navy said it rescued a naval personnel abducted together with his daughter in the late hours of Dec. 28 in Ozuoha/Omademe community in Rivers.

The Commander, Nigerian Navy Ship Pathfinder, Port Harcourt, Commodore Sam Bura, said in a statement on Saturday that the victims were freed shortly after gunfire with their abductors.

He said five suspects, who carried out the kidnap, were arrested at the scene while their leader escaped with gunshot wounds, adding that troops were currently on trail of the escapee.

“The suspects conspired and kidnapped a naval personnel and his daughter at about 8 p.m. on December 28 around Ozuoha/Omademe communities in Ikwerre local government area of the state.

“Consequently, we mobilised a quick response team, in collaboration with other security agencies, towards rescuing the personnel and his daughter.

“The armed rescue team rescued the victims after engaging the kidnappers in a gun fight and thereafter dislodged the kidnappers den in Omademe community.

Bura said the gang was responsible for several abduction and cult related activities in Ubima community and in other parts of the state.

He claimed that the gang had recently attempted to assassinate a director of the Naval War College, Ubima, but was unsuccessful.

The commander said the suspects had been handed over to the Nigeria Police to carry out further investigation and possible prosecution.

“We call on members of the public to contact the nearest police station or other security agencies with where about of the fleeing gang leader,” he said.