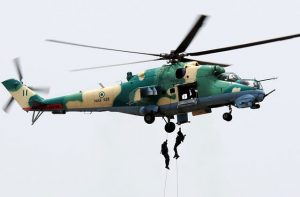 Two fighter aircraft – an Alpha Jet and an EC 135 attack helicopter – were sent to the troubled communities of Adamawa State,by the Nigerian Air Force to bomb what it called “hideouts of miscreants” in the villages.

The NAF Director of Public Relations and Information, Air Commodore Olatokunbo Adesanya, confirmed the deployment to The PUNCH, noting that the bombardment was “warning shots” rather than shooting to kill.

It was reported on Tuesday that scores of people were killed in Dong and Lawura villages in the Demsa Local Government Area of Adamawa State when rampaging Fulani militia attacked some communities, burning down no fewer than five villages.

Residents had confirmed the killing of a District Head and another village head by gunmen as the attackers reportedly set buildings on fire and damaged property.

The police in the state had confirmed the violence, but had yet to come out with the casualty figure.

The attacks on the villages, which entered its fifth day on Monday, reportedly witnessed air bombardment from the air force to stop the rampaging Fulani militia from entering into Numan.

Earlier on Monday, the police had confirmed that six police officers were killed in the attack between herdsmen and farmers.

“We lost six policemen in an ambush by suspected Fulani herdsmen. The police were on their way to Dowaya village, outside Numan (district), with the intention of disarming Fulani herders, who reports said were carrying arms.

“No arrests had been made in connection with the ambush,” Othman Abubakar, the Police Public Relations Officer, had said.

Adesanya noted that the deployment of the aircraft was “a continuous exercise.”

The NAF spokesman added, “We launched an attack both with our Alpha jet and the EC 135 helicopter. We were able to keep touch with the activities in the area. The deployment is a continuous exercise.

“We have an oversight function over the whole area to provide security. Before now, we had actually been doing constant air surveillance.

“Our intelligence, surveillance and reconnaissance platforms reported the bombing of villages and the rest. The two helicopters are both involved.”

When asked if the air force could not mistakenly bomb fleeing villagers, the NAF spokesman said, “The air force exists to protect Nigerians, not to fight fellow Nigerians. How it is done is that we have a video recording of operations. It shows those who were actually attacked.

“There were more of warning shots – not shots to kill. Immediately the shots were fired, the miscreants realised fire was coming and they actually fled the area. I do not, at this time, have any casualty figure; all I know is that there was a positive effect of the missions.”