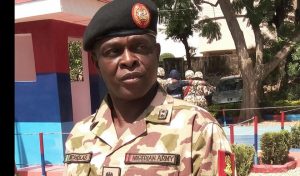 The officer leading the Army troops fighting Boko Haram, has been replaced by the Nigerian army on Thursday, after a recent surge in deadly attacks in the country’s remote northeast.

He takes over from Major General Ibrahim Attahiru, who was appointed to the post just seven months ago and now has been reassigned to the army’s policy and planning department.

No reason was given for the change.