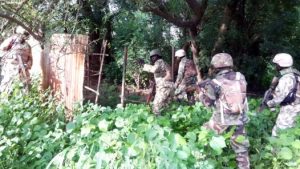 Three Boko Haram insurgents were killed by the Nigerian Army while 200 cattle were rescued in Borno, this was confirmed by the
Director of Army Public Relations, Brig.-Gen. Sani Kukasheka in Maiduguri.

He said that the troops engaged the insurgents’ on Saturday at Beneri village, killed two of them and recovered the stolen cattle.

Kukasheka said that the troops also recovered one AK-47 rifle, an emptied magazine, two motorcycles and a National Identity Card, adding that the cattle had since been returned to the owners.

Kukasheka disclosed further that the troops, in a separate operation, ambushed the insurgents at their crossing point at Firgi, Bama Local Government Area of Borno.

The army spokesman revealed that the troops killed one insurgent, suspected to be an expert in Improvised Explosive Device, and recovered one gas cylinder.

“Troops of 21 Brigade, Operation Lafiya Dole, in conjunction with elements of 121 Battalion, on Friday, laid an ambush for Boko Haram terrorists at one of their suspected crossing points near Firgi, Bama Local Government Area of Borno State.