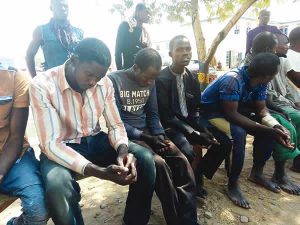 Three suspected members of a gang, called Babel, have been arrested by the Bauchi State Police Command for the alleged murder of nine persons in the Warji Local Government Area of the state.

While parading the suspects before journalists at the police headquarters in Bauchi, the state Police Public Relations Officer, Kamal Abubakar, said a combined team of the Anti-Kidnapping Unit and Federal Special Anti-robbery Squad arrested the suspects based on intelligence report.

He said, “In our unrelenting efforts to rid the state of crime, the command, under the leadership of CP Sanusi Lemu, through a coordinated operation, smashed different criminal syndicates which specialised in perpetrating various crimes in the state.

“On December 12, about 2pm, a combine team of the Anti-Kidnapping Unit and FSARS, acting on credible intelligence that the leadership of the notorious Babeli group in Warji town had concluded plans to attack civilians on Warji market day, arrested one Ado Hamza, aka Dawa Ado (35); Idris Alhaji Hamza (47); and Ardo Abdu (67).

“The gang members are suspected to be involved in the killing of nine persons, namely: Ori Mai’awaki, of Gabanga village; Boderi Ibbi, of Ranga village; Musa Beti, of Tiyin village and Mota Aru of Aru village.

“The group had, among other crimes, denounced the presence of constituted authorities and were taking the law into their own hands by killing innocent civilians and extorting money from other. They also threatened to kill one Ya’u Nafada of Lafiya village, Warji LGA.”

Abubakar, a Deputy Superintendent of Police, stated that on December 16, 2017, the command arrested Abubakar Yakubu, Suleiman Mohammad and Kamalu Kabiru, all of Doya ward for allegedly stabbing a teenager to death.

He said the three suspects, and eleven others now at large, had conspired and killed the victim, Abdulsalam Danlami.

He added that the principal suspect, Yakubu, voluntarily confessed that he used a knife and stabbed the victim in the neck, which led to his death.

The police spokesman noted that during investigation, a bloodstained knife that was alleged to have been used in committing the crime was recovered from the second suspect, Mohammad.

He said a team of the command’s Anti-Kidnapping Unit arrested one Ashiru Adamu for allegedly kidnapping and raping a female teenager, Sadiya Adamu.

“The suspect later called her family to inform them that the victim was in his custody. Upon the receipt of the information, a team of the Anti-Kidnapping Unit of the command swung into action, traced and arrested the suspect.

“The victim informed the police that the suspect raped her several times before she was rescued,” Abubakar added.

He said one Tecno mobile phone used in committing the crime was recovered from the suspect.