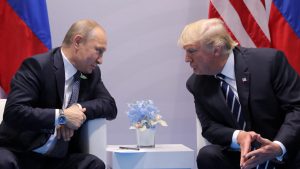 Russia’s justice ministry on Tuesday named nine US media outlets including Voice of America as “foreign agents” after President Vladimir Putin signed a law allowing international media to be slapped with the controversial label.

The ministry said that US-funded Voice of America and Radio Free Europe/Radio Liberty and seven of their media affiliates had been recognised as “carrying out the functions of a foreign agent”, in a statement posted on its website.

Russia said this was a retaliatory move after Kremlin-funded RT television registered as a “foreign agent” in the United States under official pressure.

Rights groups fear the law could have a chilling effect on the ability of outlets to carry out independent reporting.

Voice of America and Radio Free Europe began broadcasting to the Soviet Union in the 1950s, playing a key role in providing its citizens with uncensored news.

Both broadcasters had already been formally warned by the justice ministry that they risked recognition as “foreign agents.”

The justice ministry has now formalised the move, naming them and their affiliates, including Radio Free Europe’s news outlets dedicated to Crimea, which Russia annexed from Ukraine, and the Caucasus.

They also include a television channel run jointly by Radio Free Europe and Voice of America called Current Time TV.

Speaking on Current Time TV in Russian, Radio Free Europe/Radio Liberty’s president Thomas Kent said that “as a result, the activities of our organisation can face even greater restrictions”.

“So far we have no concrete information on these restrictions,” the head of the US Congress-funded corporation said.

He stressed: “We remain committed to continuing our work in journalism in the interests of providing precise and objective information to our Russian-language audience.”