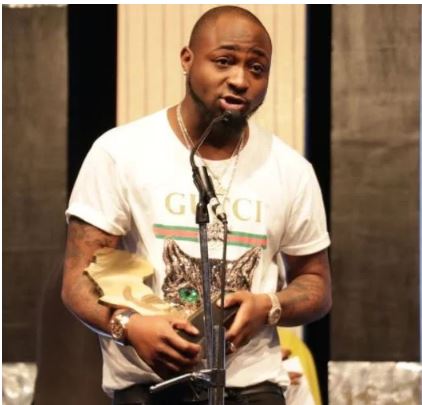 Last night, Nigerian pop star Davido received the award for Musician of the Year at The Future Awards Africa 2017. Emerging top in the music category with other artistes such as Tekno Miles, Kiss Daniel, Adekunle Gold and Simi, Davido publicly declared that he holds no malice against anyone.

In his acceptance speech, Davido spoke on unity of all races and one love before he chipped in “for this industry, I no dey fight anybody o”.

The event was held at the Federal Palace Hotel, Victoria Island, Lagos.

Share
Facebook
Twitter
WhatsApp
Previous articleWTF? S3x toy store comes online to claim Lilian Esoro requested for vibrators from them
Next article“She is the Bone of my Bone and the Flesh of my Flesh”- Mercy Johnson’s husband
- Advertisement -

Popular Nigerian relationship therapist, Joro Olumofin has shared a piece of advice to ladies who ask men for money. Olumofin stated that he was not...
Read more

BBNaija Star, Mercy Eke Steps Out In Church To Give Testimony (Video)

2019 Big Brother Naija winner, Mercy Eke, on Sunday stepped out in church to testify about her victory at the reality show. While the reality...
Read more