Luck has ran out on two notorious armed robbers after they were caught by men of the Nigeria police in Ogun state. 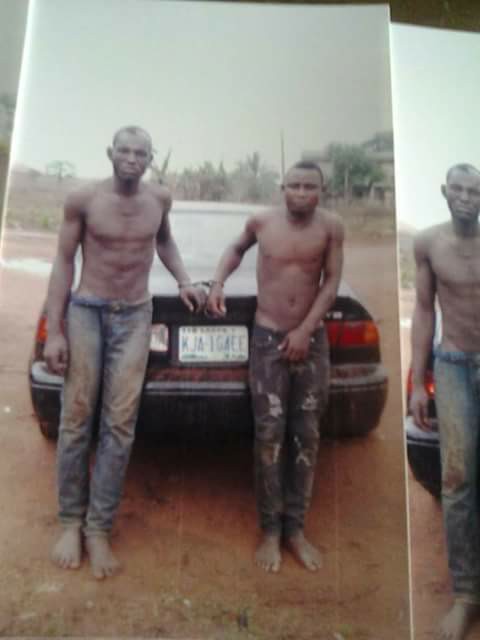 The Ogun state police command has arrested two men who specialised in car snatching across Ogun state. The two, Damilola Omolegbe and Saidi Asirikoko were arrested at oko ape area of igbogila on Friday 8th of December 2017.
One of the suspects, Damilola Omolegbe contacted one Abimbola Olaore, a driver of Toyota Camry with registration number KJA 164 EX in order to hire his vehicle from Alimoso in Lagos to Igbogila on an agreed fee. On getting to oko ape area, he asked the driver to stop for him to ease himself only for two other men to emerge from the bush with dangerous weapons and tied him with rope after beaten him severely and dispossessed him of his car.
Unfortunately for the suspects, while escaping with the car, they ran into a ditch and the vehicle was unable to move further. They jumped down and ran into a nearby bush.
Distress call was made to the police, consequence of which the Area Commander Ilaro, ACP Titus Musa detailed police patrol team to the scene. The bush was thoroughly combed by the policemen in collaboration with the members of the community and the two suspects were eventually arrested while the remaining one escaped. The car has been recovered to the station.
Meanwhile the commissioner of police CP Ahmed iliyasu has ordered the immediate transfer of the suspects to FSARS for discreet investigation.
ASP ABIMBOLA OYEYEMI, PPRO OGUN STATE.