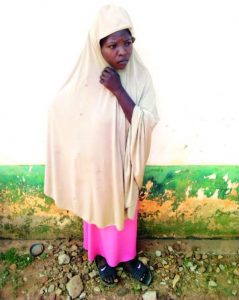 The Nigeria Security and Civil Defence Corps, ( NSCDC) Nasarawa State Chapter , rescued a housewife,identified as Mrs. Fatima Muhammed, 18, and Hafsat Adamu, 15, who were allegedly abducted by a yet-to-be-identified criminal.

The state commandant of the NSCDC, Mr. Mamud Gidado-Fari, who disclosed this in an interview with Northern City News on Sunday, said the victims were rescued last Friday at Line Supper Cinema in the Lafia Local Government Area of the state.

According to him, one Ibrahim Nasir reported to the command that his wife had been kidnapped by certain unknown person.

Gidado-Fari said security operatives swung into action, rescued the housewife and handed her over to her husband.

Gidado-Fari explained that the housewife was found at the kidnapper’s hideout, where she had been locked up for a week by the suspect.

“We forced our way into the room and found the woman alongside a 15-year-old girl, Hasat Adamu,” he said.

He said the teenager had also been handed over to her parents, noting that the motive of the abductor had yet to be determined.

The commandant said, “The nature of the case is what we are trying to investigate because as it is, we don’t know whether the motive of the abductor was ransom or for ritual. The suspect is at large, but by the time we get him, we shall investigate his motive.”

But Fatima said she was not abducted, saying she was at her lover’s place when some NSCDC operatives broke into the room and whisked her away.

She said, “I was with my sick mother from morning till evening and when it was time for me to go home I decided to see my old boyfriend at the Tudun kwari area of Lafia Local Government Area of Nasarawa State, because I didn’t have money for transport.

“I had to stay till the following day because it was late and before I knew what was happening, I saw NSCDC (operatives) breaking into my boyfriend’s room and that was how I was arrested.”

She stated that she left her matrimonial home because she had been having issues with her husband since they got married.

“I am a married woman, but I left my matrimonial home because I have been having quarrels with my husband ever since we got married. My husband had told me not to go anywhere there is crisis and there was never a day I disobeyed him,” Fatima stated.

Meanwhile, Gidado-Fari told Nothern City News that the Nasarawa NSCDC command had arrested over 15 suspected criminals within two weeks, noting that they were apprehended for various offences bordering on theft, kidnapping, rape and armed robbery.

Gidado-Fari explained that seven of the suspects had been charged to court while the remaining suspects would be arraigned this week.